Q2.  Find out words for sheep, goat, camel and yak in your local language and also in other language of our country .
Ans:

Q3.  Boojho is wondering why it hurts when someone pulls his hair but no when he goes for haircut.
Ans:  Hair are dead cells which are attached to the scalp with ling cells. When we get hair cut, the dead cells are being cut so we don’t feel pain whereas when it is pulled from the scalp the living cells are also being pulled along.

Q4.  Boojho is wondering why a cotton garment cannot keep us warm in winter as a wollen sweater does.
Ans:  Cotton clothes are thin and do not have space to trap air. Whereas wool can trap air between its fibres. Air is a pure conductor of heat and prevents heat loss from our body.

Q5.
a)  Take an artificial silk thread and a pure silk thread. Burn these threads carefully. Did you notice any difference in the smell while burning .
Ans:  Yes. Both  the threads give out different smell on burning.

b)  Now, burn a woolen fibre carefully. Did it smell like burning of artificial silk or that of pure silk. Can you explain Why?
Ans:  It smells like pure silk and gives the smell of burning hair. This is because pure silk and wool are both natural fibres.

1.  You must be familiar with the following nursery rhymes:
i) “Baa baa black sheep, have you any wool”.
ii) “Mary, had a little lamb, whose fleece was white as snow”.

a)  Which parts of the black sheep have wool?
Ans:  The fine soft  hair close to the skin has wool.

b)  What is meant by the white fleece of the lamb?
Ans:  It refers to the hair of the lamb used for making wool.

i)  Rearing: Raising of animals for commercial purposes such as for milk, fur etc is called rearing.
ii)  Shearing: The process of removing fleece of the sheep along with a thin layer of skin is called shearing.
iii)  Sericulture: The rearing of silk worms for obtaining silk is called sericulture.

5.  Given below is a sequences of steps in the processing wool. Which are the missing steps? Add them :

8.  Match the words of Column I with these given in Column II .

9.  Given below is a cross wood puzzle based on this lesson. Use hints to fill in the blanks spaces with letters that complete the words. 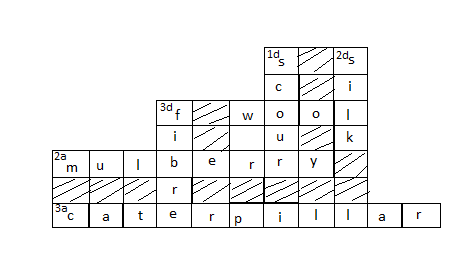 1.  Paheli wants to know the maximum length of continuous silk thread that can be obtained from a cocoon .
Ans:  980 metres

2.  Boojho wants to know why caterpillars need to shed their skin when they grow bigger but we humans do not .
Ans:  As the caterpillars grow in size, its skin doesn’t grow . Eg. increase in size. As a result the skin becomes tight and cracks and they shed their skin. Whereas as human grow their skin also grows and stretches.

3.  Boojho wants to know why caterpillars should not be collected with bare hands.
Ans:  Caterpillars skin have hair which can cause allergy when touches so also the heat of our body can kill them.

5.  Someone told Paheli that an animal called ‘vicuna’ also gives wool. Can you tell her where this animal is found?
Ans:  Spain .