1.  Name and explain in brief the four major domains of the earth.
Ans: The four major domains of the earth are (i) Lithosphere (ii) Atmosphere (iii) Hydrosphere (iv) Biosphere .
The solid portion of the earth on which we live is called the Lithosphere. The gaseous layers that surround the earth, is the Atmosphere, where oxygen, nitrogen, carbon dioxide and other gases are found. Water covers a very big area of the earth’s surface and this area is called the Hydrosphere. The hydrosphere comprises water in all its forms, that is, ice, water and water vapour. The Biosphere is the narrow zone where we find land, water and air together, which contains all forms of life.

3.  Write a few sentences on the following continents.
Ans :
i) Asia – Asia is the largest continent. It covers about one – third of the total land area of the earth. This continent lies in the north eastern hemisphere. The Tropic of Cancer passes through this continent.

ii) Europe – Europe is much smaller than Asia. This continent lies to the west of Asia. The Arctic Circle passes through it.

iii) Africa – Africa is the second largest continent after Asia. The equator or 00 latitude runs almost through the middle of this continent.

iv) North America – North America is the third largest continent of the world. It is linked to South America by a narrow strip of land called the Isthmus of Panama.

vi) Australia – Australia is the smallest continent that lies entirely in the Southern Hemisphere. It is surrounded on all sides by the oceans and seas. It is called an Island continent.

vii) Antarctica – Antarctica, completely in the Southern Hemisphere, is a huge continent. The south pole lies almost at the centre of this continent.

4.  There is a need to limit the use of the resources. Why .
Ans: Emission from industries, thermal power plants and vehicles, pollutes the air. Carbon dioxide (CO2)  is an important constituent of air. But increase in the amount of  CO2  leads to increase in global temperatures. This is termed as global warming.
There is thus, a need to limit the use of resources of the earth to maintain the balance of nature between the domains of the lithosphere, the atmosphere and the hydrosphere.

a) Draw a neat picture of the biosphere. 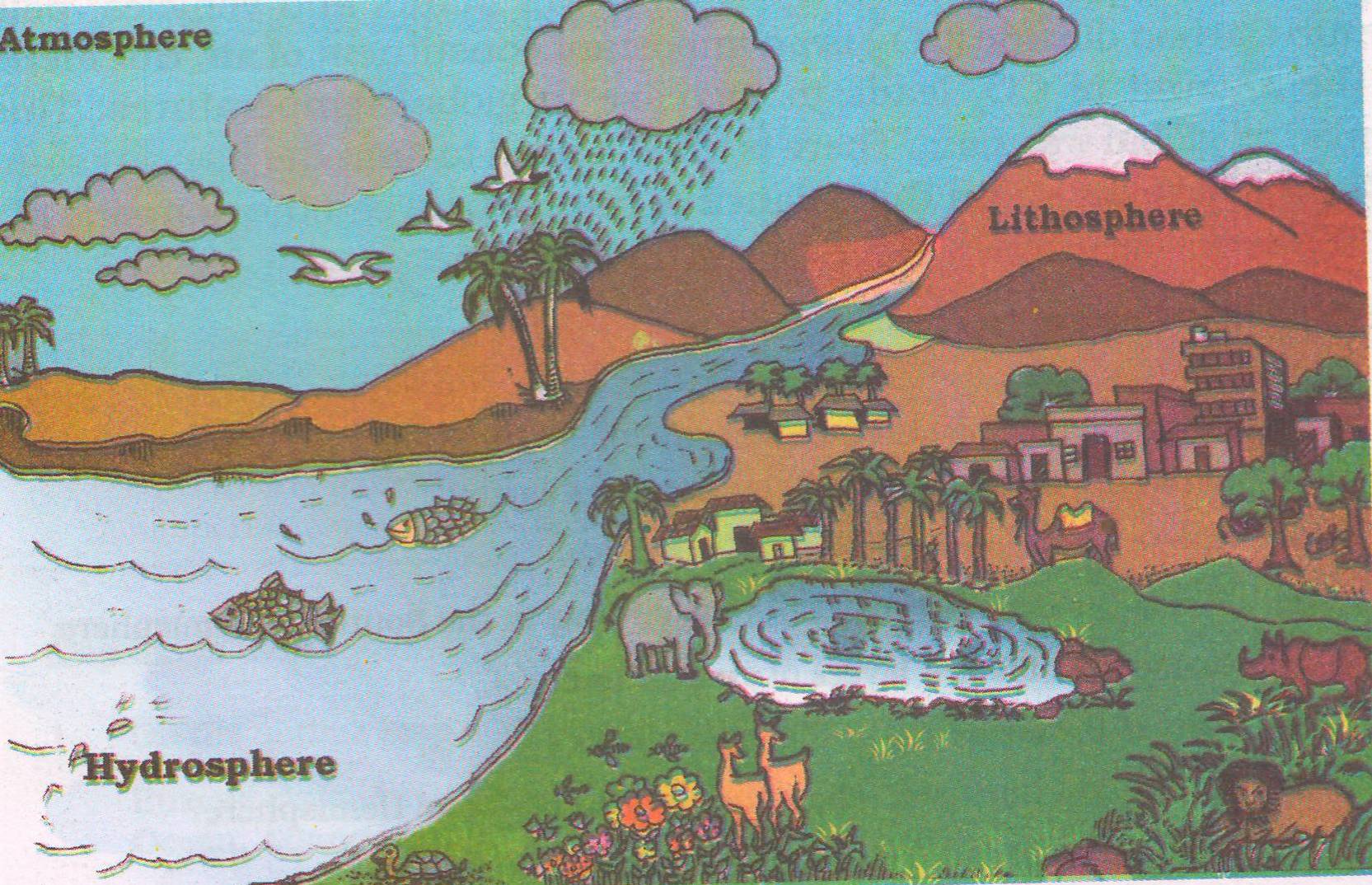 1. Lithosphere :- The solid portion of the earth on which we live is called as the Lithosphere.

2. Atmosphere :- The gaseous layers that surround the earth , is called as the Atmosphere.

3. Hydrosphere:- A hydrosphere is the total amount of water on the earth .

4. Biosphere :- The biosphere is the narrow zone where we find land, water and air together , here all forms of life can live.

5. Continents:- The large landmasses are known as the continents.

7. Global warming:- Increase in the amount of carbon dioxide leads to increase in global temperatures. This is termed as global warming.

9. Animals kingdom:- Animal kingdom includes all the animals on the earth.

10. Wind:- Moving air from high pressure to low pressure is known as wind.