Q1)  You have studied in class VI that food consists of many components. Try to recall and list them below.

1) What is the type of food and mood of feeding of the following animals? Write down your observations in the given table. You may find the list of modes of feeding given below the table helpful.

i) Wash your hands. Look into the mirror and count your teeth.
1.   How many kinds of teeth could you find?
Ans:  Four

2.  Take a piece of apple and eat it. Which teeth do you use for biting and cutting?
Ans:  Incisors

3.   Which one for piercing and tearing?
Ans:  Canines

4.   Which ones are used for chewing and grinding?
Ans:  Premolars and Molars

1.   Why is there a change in colour in the test tubes?
Ans:
Test tube A: blue black colour appeared because of presence of starch.
Test tube B: colour remains unchanged due to digestion of starch into sugars by the action of saliva.

2.  Which areas of the tongue can detect sweet, salty, sour and bitter substances?
Write down your observations and label fig 2.6.
Ans : 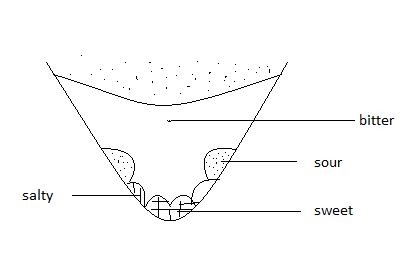 3.   Paheli wants to know how food moves in the opposite direction during vomiting.
Ans:  An intense pressure is formed in the stomach when the food is not accepted by the stomach. As a result the contents of the stomach is pushed back in form of vomiting.

3.  Tick (√) mark the correct answer in each of the following:

4. Match the items of column I with those given in column II :

5.  What are villi? What is their location and functions?
Ans:  The inner walls of the small intestine have thousands of finger like outgrowths. These are called villi. Villi are located inside the small intestine and increases the surface area for absorption of the digested food.

6.  Where is the bile produced? Which component of the food does it digest?
Ans:  Bile is produced by the liver and stored in the gall bladder. It helps in digesting fats.

8.  Why do we get instant energy from glucose?
Ans:  Glucose is the simplest form of carbohydrate which can be easily absorbed by the body to give energy.

9.  Which part of the digestive canal is involved in :

11.  Match the items of Column I with suitable items in Column II : 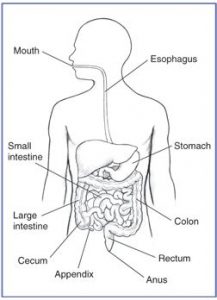 13.  Can we survive only on raw leaf vegetables / grass? Discuss .
Ans:  No, raw leafy vegetables / grass mainly consists of cellulose which cannot be digested by us due to the lack of certain bacteria. So also our body needs a complete balance of different nutrients.

ii)  Till when does a patient need to be given glucose?
Ans:  Till the patient is well.

iii)  How does glucose help the patient recover?
Ans:  Glucose is a simple sugar which is easily absorbed in the blood and hence it provides instant energy.

Q2.  Find out what vitamins are and get the following information.

i)  Why are vitamins necessary in the diet?
Ans:
i) Vitamins are essential nutrients that help our body to stay healthy and function properly
ii) Vitamins are needed for :
a) proper functioning of our body.
b) to fight off diseases .

ii)  Which fruits or vegetables should be eaten regularly to get vitamins .
Ans:  Green leafy vegetables, all fruits provide vitamins.