2.  Will the government intervene if some religious group says that their religion allows them to practise infanticide? Give reasons for your answer.
Ans: Yes, the government will intervene if any religious group says that their religion allows them to practice infanticide. We can give the following reasons to support our answer:
a)  No religion in the world allows anyone to kill an infant. In all religions non – violence is given the maximum importance. Jainism is the most vital religion following the principle of non-violence. Jesus Christ was himself the biggest symbol of love. Other religions also follow non-violence.
b)  If infants or child is killed to please any god or goddess, it is nothing but a great crime. The system of sacrifice was promoted by selfish and religious leaders in ancient or medieval times.

Ans:
(i) Everyone should honour the country’s constitution which grants Right to Equality and Right to Freedom for all.
For example: In the United States of America most children in government schools have to begin their school day reciting the ‘Pledge of Allegiance’. This pledge includes the words ‘Under God’.

(ii) It is important for a secular state. It is essential that the state keeps itself away from religious matters. It does not force to follow any particular religion nor take away the religious freedom of individuals because the constitution of a secular country provides religious freedom as a Fundamental Right.

(iii) It is important to establish equality among the people of different castes and economic or social status of the religious community.
Example: Before India became a Republic, the upper caste of Hindus believed in untouchability. And they discriminated on the lower castes on the basis of caste.

4.  Look up the annual calendar of holidays of your school. How many of them pertain to religion ?What does this indicate?

Indication : The above division of the holidays pertaining to different religions is that:
i)  India is a land of many religions and creeds.
ii)  People celebrate various traditions and festivals on the specific occasions.

6.  The Indian state ,both keeps away from religion as well as intervenes in religion.This idea can be quite confusing.Discuss this once again in the class using examples from the chapter as well as those that you might have come up with.
Ans:
i)  The Indian government at the centre as well as state level declares religious holidays. Any leader can join in as an individual.
ii)  The head of the state, Prime Minister, President, Chief Ministers, opposition leaders, political parties and so on can convey their good wishes to the people of any religion on the occasion of religious festival.
iii)  The Indian state also intervenes if some wrong religious practices are followed. And the Indian state is impartial. 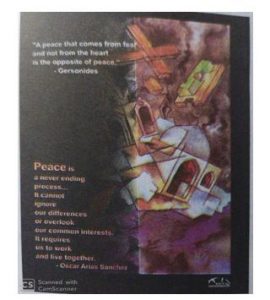 Ans:
Peace is the way of life. Without peace it creates a mental and physical pressure. All the religion preaches peace, non-violence, humanity and brotherhood. Peace is for the requirement of common people. Hence terrorism is condemned by all of us.

Poster suggestions:
The poster shows a chain of different religious monuments that is mosque, temple, church etc. Different people follow and believe different religion and practices as a result various festivals and traditions are found in India.