1. State whether true or false :

(a) Raja’s who let the ashvamedha horse pass through their lands were invited to the sacrifice.

(b) The charioteer sprinkled scared water on the king.

(c) Archaeologists have found palaces in the settlements of the janapadas.

(d) Pots to store grain were out of Painted Grey Ware.

(e) Many cities in Mahajanapadas were fortified.

2.  Fill in the charts given below with the terms :

THOSE WHO PAID TAXES 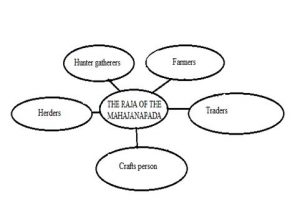 Hunters gatherers – They had to provide forest produce such as elephants, furs and other items as a tribute to the raja.
Farmers                    – They gave one –sixth of the produce to the state.

4.  Why did the Raja’s of Mahajanapadas build fort.
Ans :  Forts were build by the Raja’s of the Mahajanapadas because people were afraid of attacks from other kings and needed protection. It is also likely that some rulers wanted to show how rich and powerful they were by building large, tall and impressive walls around cities.Also in this way, the land and the people living inside the fortified area could be controlled more easily by the king.

5.  In what ways are present day elections different form the ways in which rulers were chosen in Janapadas
Ans :  In modern days we have a democratic system of government. Each citizen has a right to vote and the ruler is decided by elections in which each citizen casts his vote.But in Janpadas, a ruler was not chosen rather a person was supposed to show his supremacy to become the ruler.to do so, the raja had to perform the ashwedha yojna so that other Raja’s in the mahajanapada would accept his supremacy.

6.  Find the state in which you live in the political map on page 140. Were there any janapadas in your state.If yes, name them.If not ,name the janapadas that would have been the closest to your state, and mention whether they were to the east, west, north or south.
Ans :  The answer depends on the region you live in.Take the help of your teacher and prepare your answer.

8.  Find out whether the groups mentioned in answer 3 have voting rights at present.
Ans : The people who could not be the assemblies were women, slaves and Kammakaras. But in the present times everyone has the right to vote in the election after a specific age irrespective of gender or profession.