1.  When is reproduction said to be sexual.
Ans: The mode of reproduction in which a male and a female gamete fuse to produce a zygote is called sexual reproduction.

2.  What is metamorphosis Give examples.
Ans: The drastic change which takes place during the development of an animal is called metamorphosis. Silkworm and frog undergo metamorphosis.

4.  Explain the importance of reproduction in organisms.
Ans: Reproduction is essential for the survival of organisms. It ensures the continuation of similar kinds of individuals, generation after generation.

8.  If millions of sperms are transferred from the male to the female body, how many fuse with the egg.
Ans: Only one sperm fuses with the egg.

9.  Draw a diagram to show fertilisation in humans.
Ans: 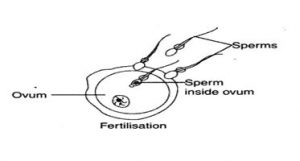 10.  What is a zygote?
Ans: A fertilized egg is called Zygote.

11.  How does the size of the egg varies in different animals.
Ans: The egg is very small in humans, much larger in hens and the largest in ostrich.

13.  What is binary fission.
Ans: Binary fission is a mode of reproduction in unicellular organisms by which a single individual divides into two parts and each part live as two independent individuals. 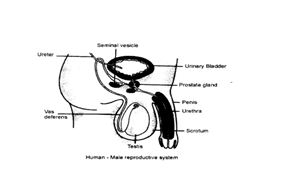 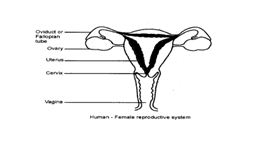 20.  Name an organism that reproduces by budding.
Ans: Hydra.