2.  What things do you eat after sprouting. How are they sprouted. How much time does it take.
Ans: We eat Chana, Moong etc. after sprouting them. To sprout them, first these are soaked in water and then wrapped in a wet cloth and hung up so that they get proper air and water. Chana takes about 12 – 15 hours in sprouting while Moong takes 10 – 12 hours.

3.  Has your doctor or someone you know ever told you to eat sprouts. Why.
Ans: Yes,  my doctor has advised me to eat sprouts because they are nutritious.

4.  Do you remember that in class iv you did an activity with seeds. Now try another one.
i) Take some Chana and three bowls.
ii) Put five Chana in the first bowl and fill it with water.
iii) Put a damp piece of cloth or some cotton wool in the second bowl. Now keep the same number of Chanas in it. Make sure that the cotton wool or cloth remains wet.
iv) Put the same number of Chanas in the third bowl. Do not put anything else in it. Cover all the three bowls.
v) Observe after two days and note the changes in the bowls.
Ans:

7.  When you split a whole masoor, you get masoor dal. But then you cannot sprout. Why.
Ans: It is because after spilliting, the sprouting capacity of masoor is lost.

8.  Look carefully at the sprouted chana and makes it drawing.
Ans: 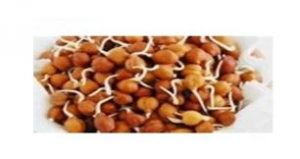 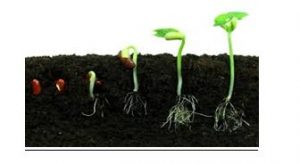 9.  Take a clay pot or a tin can with a wide mouth. Make a small hole at the bottom of the can. Fill the can with soil. Put four or five seeds of the same kind in the soil. And press them gently. Different group can plant different kinds of seeds, such as mustard (sarson), fenugreek (methi), sesame (til), or coriander (dhania).

iii) The day you observe something coming out of the soil, start filling the table:

ii)  What was the difference in the height of the plant on the first and second day.
Ans: The height increased by about half a centimeter.

v)  Was there any change in the stem of the plant.
Ans: Yes, the stem became thicker day by day.

10.  Which seeds took the most number of days for the stem to come out of the soil.
Ans: Seeds of sesame (til) .

11.  Which seeds took the least days to come out of the soil.
Ans: Mustard (sarson) .

12.  Which seeds did not grow at all. Why.
Ans: All seeds grew up. However if proper water and air had not been provided, they would not have grown at all.

13.  Did anyone’s plant dry up or turn yellow. Why did this happen.
Ans: Yes, some students plant dried up, it happened because those plants did not get proper water and air

14.  What would happen if the plants do not get water.
Ans: They would dry up or turn yellow.

16.  How does a big plant grow from a tiny seed.
Ans: The seed germinates to produce a seedling absorbs water and nutrients from the ground and grow into a big plant.

17.  What would happen if a plant could walk. Draw a picture of a plant walking.
Ans: 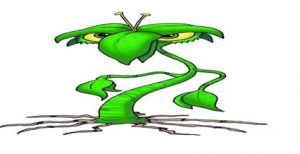 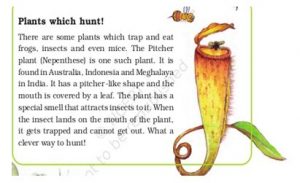 5.5     So many seeds!
19.  How many types of seeds can you collect. Where will you find them. Each of You should try to collect as many types of seeds as you can. After that, put all the seeds together. Now observe carefully their shapes, sizes, colour, Texture (smooth or rough) Make a seed chart put up in the class. You can start with a table like this.
Ans: 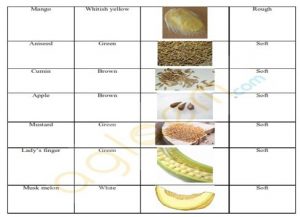 a) Did you keep Aniseed (Saunf) and cumin (Jeera) in your list.
Ans: Aniseed and Cumin are also taken in the list.

i) Seeds that are used as spices in your home.
Ans: Cumin, mustard, etc.

22.  Do you know any games that can play with seeds. Discuss with your friends.
Ans: Tamarind seeds are used to play the game of Chowka Bhara. It is a game like snakes and ladders. Also tamarind seeds are broken into two halves and six of those halves are used as a dice to play any game. Similarly, a type of flute is made from mango’s seed.

23.  Have you ever seen any seed that can fly.
Ans: Yes, I have seen such seeds. It has white hair attach to it.

25.  Look at your seed collection. Guess how many of those could have travelled by flying.
Ans: I think some seed could travel by flying . Example:- Cumin and Aniseed.

26.  Did you get any idea from these seeds.
Ans: Yes, this seed can be used to play many games and for decorating something.

27.  Look at the picture given below and guess how the seeds travel and reach different places.

28.  Some plants spread their seeds over long distances. When the Soyabean pods are ripe they burst and the seeds are thrown out. Have you ever heard their sounds.
Ans: No I have not heard their sound.

29.  Think what would happen. If seeds did not spread and remained at one place only.
Ans: If seed would not spread and would remain at one place only, there could be many problems for those seeds. All the seeds would fall near the parent tree. This will prevent those trees from getting enough sunlight, air and water. As a result most of the seeds would fail to germinate and none of plant would grow properly.

31.  What all are grown in India long ago. Were mangoes and bananas grown here. What came from other countries. Imagine food without potato and tomato!
Ans: In India many crops like Tea, Mango, Orange, Radish, Methi, Spinach etc. were grown a long ago. Yes, Mangoes and Bananas were grown here. Tomato, Potatoes, Chillies, Coffee, etc. have come from other countries. We cannot imagine a proper vegetable curry without tomato. Potato is used in most of the dishes. Such dishes would not be possible without potatoes and tomatoes.

32.  Reena has drawn this picture of the seed sprouted by her. What do you think the seed need for sprouting. Write in your own words. How would Reena’s look if they did not get the things needed. Show by drawing a picture. 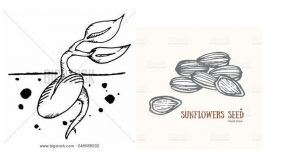 Ans: Water and air are required for sprouting. If the seeds do not get water there would be no changes in them. And if they got only water but no air, then they would not sprout at all though they would swell up.