1.  Ayesha put a puffed puri in a bowl of water, would it sink or float.
Ans: The puri will float.

5.  Do this experiment in groups of your friends. Each group will need a big pot filled with water and the things listed in the table. Put each thing one – by –one in water and observe. 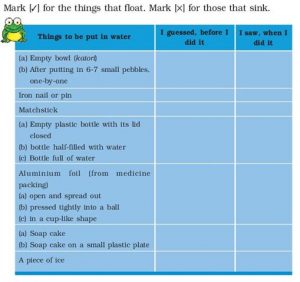 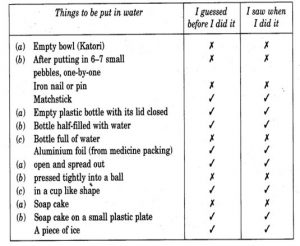 6.  Find out the other groups which things floated and which sank in the water .
Ans: A ball, A Styrofoam ball, etc. can float n water. An iron nail, a key, etc. will sink in water.

7.  After doing the experiment, fill in the blanks.

i) The iron nail sank in water but katori floated  . I think this happened because iron nail could displace less amount of water than what was displayed by the katori .

ii) The empty plastic bottle floated. The bottle filled with water sink  because the filled bottle could displace less amount of water compared to its weight .

8.
i) Take some water in a glass. Put a lemon in it. Now keep putting salt in the water, half – a – spoon at a time. Were you able to float your lemon in water.
Ans: Yes, the lemon started to float on water.

ii) What do you think, the lemon floated in salty water because __________ .
Ans: After adding salt, the water became thicker and thus, the lemon started floating.

i) Suggest some ways to Hamid for quickly dissolving sugar.
Ans: Hamid should follow any of these methods:
a) Stir the mixture thoroughly.
b) Warm the mixture over a flame.

10.  Make group of four friends. For the experiment you will need 4-5 glasses or bowls, spoons, water, and the things listed in the table. Take some water in each glass. Now try to dissolve one thing in one glass. Observe what happens and note in the table.

16.  You also try do the same and then tell which drop went ahead . why did it slide faster .
Ans : The drop of water went ahead slide faster. Drops of oil or sugar syrup stick to the tiffin box.

17.  One day Ayesha’s mother put some water to boil on the stove for making tea. She got busy with something and forgot about it . When she remembered and came to check , she found only a few drops of water left in the pan.

i) Think where did the water go.
Ans : The water evaporated and turned into vapour.

19.  What all things do you put in water to make tea . which of those things dissolved in water .
Ans : For making tea , I put sugar , milk and tea leaves in water . sugar and milk dissolve in water.

4) State the mixture of sugar and water called.
Ans: A mixture in which a substance has fully dissolved in water is called a solution. And the substances is said to be soluble. An example of this type of mixture is sugar in water. Here the dissolves fully to give a clear solution.

6) How the salt is made.
Ans : The sea water is collected in shallow beds dug in sand.Water is allowed to dry in the sun. Salt remains on the ground after the water is dried.