CLASS 5 EVS PART – I CHAPTER 9. UP YOU GO TEXT QUESTIONS

3.  What do you think about the paths in the mountains. Draw a picture.
Ans: 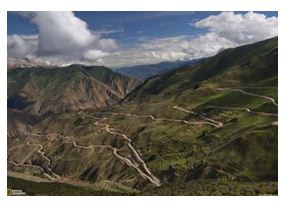 5.  How would you feel if you were made a leader in such a camp.
Ans: I would feel very grateful  and proud for getting such responsibility.

6.  What does a class monitor have to do.
Ans: A class  monitor has to do many things such as:
i) Maintaining discipline in the class, in the absence of teacher.
ii) Arranging necessary items like chalk , duster, dustbin, etc.
iii) Conveying the problems of the students to the teacher.

10.  What else can we use if we want to cross a river in the mountains.
Ans: For crossing the river we need thick rope, sling and pitons on both the sides.

12.  Have you ever heard of anyone who has done something adventurous.If yes, What.
Ans: Yes, one of my friends is fond of river rafting which is an adventurous sport.

13.  Have you ever done anything adventurous. If yes, tell your class. Write about it in your own words.
Ans: Yes, during a team building exercise. I climbed a very tall tree. It was a thrilling experience for me especially when I reached very high.

14.  Have you ever climbed a tree. How did you feel. Were you scared. Did you ever fall.
Ans: Yes, I climbed a coconut tree during my vacations at my village. It was adventurous. I felt somewhat scared. I have never fallen from a tree.

17.  Have you ever lost your way. What did you do then.
Ans: Yes I have lost my way many times. I did not panic and I told one uncle to call my father and  I told him where I was.

18.  Why do you think Khondonbi have sung loudly.
Ans: Khondonbi may have wanted to send some signals so singing was a good way to send signal to the rescue team so she sang loudly.

19.  Have you ever seen someone doing something special to get over their fear. What and when.
Ans: Yes I have seen my sister shutting her eyes during a ride on a giant ferry wheel. She said she did that to get over her fear.

20.  Ask your friend for a book without speaking. Try to explain something to the class in the same way.
(Student are suggested to try this question) .

23.  Imagine you are on a mountain. How do you feel there. What can you see. What do you feel like doing there.
Ans: I feel excited. I can see vast blue sky around me. I feel like I am at the top of the world.

25.  When have you seen our National flag being hoisted.
Ans: During Independence Day and Republic Day celebrations.

27.  Make groups of 6 – 8 children. Design a flag for your group. Explain why do you chose that design.
Ans:

This flag is designed for the North and South unification. The red color stands for unity and the bloodshed of martyrs, the white for a bright future, and the black for the supposed dark past.

28.  Explain why it can be adventurous and challenging to climb a mountain. How would you prepare if you were to climb a mountain. What would you take with you. Write in your own words.
Ans: Mountain offers many challenges like rough terrain, high altitude, rare air which makes it a difficult task to climb the mountain. Due to difficulties involved, climbing a mountain is adventurous and challenging. I will do lot of practice before the actual climb. I will take all the mountaineering equipment, necessary food, medicines and oxygen cylinder with me.

Read and find out :

2.  What is Rapling.
Ans: Using a rope in a special way to come down of the mountain is called rapling.

4.  Who is Bachhendri Pal. Why is she famous.
Ans: Bachhendri pal was the first Indian woman and fifth women in the world to reach the peak of the Mount Everest. She summited Everest on 23rd May 1984.