CLASS 6 HISTORY AND POLITICAL SCIENCE CHAPTER 1. WHAT , WHERE , HOW AND WHEN ? 1.3 ADDITIONAL QUESTIONS

(1)  Where did the early people live.
Ans :  Some of the earliest people lived near the banks of river Narmada.They were food gatherers, they hunted animals.

(10)  Who are the archaeologists? What they do.
Ans :  Archaeologists are the people who study object made and used in the past.They explore and excavate (dig) to find old object, bones of living being ,animals, birds to find out what they ate.

(1)  Gatherers – Gatherers are the people who gathered their food.

(2)   Manuscripts – Manuscripts are the books that were written long ago by hand on palm leaf or barks of trees known as birch.

(3)  Inscriptions – These are writings on relatively hard surface such as stone or metal.

(4)  Excavation – Excavation is the process of digging under the surface of the earth to find old objects.

(5)   Archaeologists – People who explore and excavate the old objects made and used are called archaeologists.

(1)  People have lived along the banks of river Narmada for several thousand years.

(2)  The places where rice was first grown are to the north of the Vindhyas.

(3)  Manuscripts were written on palm leaf.

(4)  People who gathered their food are called gatherers.

(5)  Travelling from one place to another led to sharing of ideas.

(1) The Vindhyas is located in the central India.

(2) The name Bharata was used for a group of people who lived in the north west.

(3) The kingdom of Magadha was located in the area along Ganga’s tributaries in the south of Ganga.

(4) The years are counted with reference to the birth of Christ.

(5) The Rigveda  is the earliest composition in the Sanskrit language.

Mark the following on the given map : 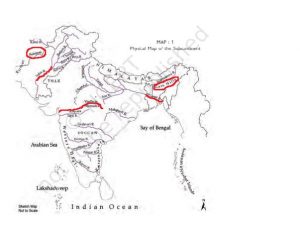