CLASS 6 HISTORY AND POLITICAL SCIENCE CHAPTER 2. ON THE TRAIL OF THE EARLIEST PEOPLE 2.3 ADDITIONAL QUESTIONS 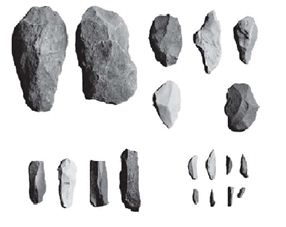 trees) and hides (animal skins), chop fruits and roots some were used  as  handles of bones or wood. Some were used to make spears and arrows for hunting. Other tools were used to cut wood.

4.  How do we know where these factories were.
Ans :  Usually, we find blocks of stone, tool that were made and perhaps discard because they were not perfect, and chips of waste stone left behind at these sites.

Hand ,  Another stone, which was used as a hammer was held in another hand. The second stone was used to strike off flakes from the first, till the required shape was obtained.

(1)  Stone on stone techniques:  In this technique the pebbles from which the tools was to be made was held in one hand and another stone which was used as hammer was held in the other hand .

(2)  Pressure flaking technique : In this technique the core was placed on a firm surface.The hammer stone was used on a piece of bone or stone that was placed on the core, to remove flakes that could be shaped into tools.

(1) Factory sites: – Places where stone was found and where people made tools are known as factory sites.

(5) Microliths: –  Stone tools of the Mesolithic period are called Microliths.

(6) Hunter – gatherers: – People who lived in the subcontinent about two million years ago and who hunted wild        animals, caught fish and birds, gathered food to eat were the Hunter – Gatherers.

(1) Habitation refers to the place where people lived.

(3) Grasslands developed in many areas due to change in climate around 12000 years ago.

(4) Many old caves have paintings on their walls.

(1) Some river are perennial while other are  seasonal .

(2) The sites where hunter – gatherers lived were  close to forest.

(3) A method of making stone tool is  pressure flaking.

(4) Tools in Hunsgi were made of  lime stone.