3.  How was the obtained wealth used in the Rigveda period.
Ans : The obtained wealth in the Rigveda period were used :
(1) Some wealth was kept by the leaders.
(2) Some was given to the priests.
(3) The rest wealth was distributed amongst the people.
(4) Some wealth was used for the performance of yajnas or sacrifices in which offerings were made into the fire. These were meant for Gods and Goddesses offerings could include ghee, grain and in some cases animals. 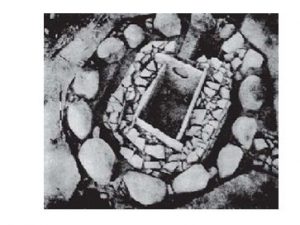 These indicate that people, perhaps belonging to the same family,
were buried in the same place through not at the same time.
The bodies of those who died later were brought into the grave through the port holes.
Stone circles or boulders placed on the surface probably served as signposts to find the burial site, so that people could return to the same place whenever they wanted to.

6.  What are the four Vedas.
Ans :  The four Veda are the Rigveda, Samaveda, Yajurveda and Atharvaveda.

(2) Aryas    –  The people who composed the hymns used the word ‘Aryas’ for themselves.

(3) Black and Red ware – The two distinctive pots with which the dead were buried, have been called the  Black.

(1) The oldest veda is The Rigveda.

(2) Brahmagiri is a site in modern Andra Pradesh.

(3) “Brahmins” and “Rajas” were two groups of people in terms of work.

(4) The Rigveda is in Vedic Sanskrit.

(5) Inamgaon  is a site on the river Ghod, a tributary of the river Bhima.