(a)  Vellalar  was a word used for large landowners in Tamil.

(b) The gramabhojaka often got his land cultivated by the  slaves and workers .

(c) Ploughmen were known as Uzhavar in Tamil.

(d) Most grihapatis were smaller landowners.

2.  Describe the functions of the gramabhojaka. Why do you think he was powerful.
Ans :  The gramabhojaka had the authority to collect taxes from other farmers. He also served the function of a judge and sometimes, that of a policeman. He was the biggest landowner in the village and exercised many powers. Hence he was very powerful in the village.

5.  Which of the iron tools shown on page 91 would have been important for agriculture. What would the other tools have been used for. 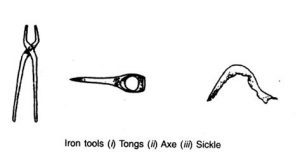 Ans :  Sickle would have been important for agriculture because it should be used for cutting grass and crops. The other tools like axes for clearing forests and the iron plough store for increasing agricultural production.

6.  Compare the drainage system in your locality with that of the cities mentioned in the lesson. What similarities and differences do you notice.
Ans :  In our locality each house have good drainage system.There is underground drainage system with covered drams of pots or ceramic rings arranged one on top of other. They have been used as toilet in some areas and as drain and garbage lumps. These rings wells have been found in individual houses.

7.  If you have seen crafts person at work, describe in a short paragraph what they do.(Hint : how do they get the raw materials, what kind of equipment do they uses how do they work, what happens to the finished product)
Ans :  The crafts person buys raw material from different parts of the city or the village. He works in a part of his home with the help of his family members. He works with simple tools like 100 ms, spindles needles. The finished product is sent either to the cities for selling or the merchants come to the houses of the crafts person to buy goods.

8.  List the functions performed by men and women who live in tour city or village. In what ways are these similar to those performed by people who lived in Mathura. In what ways are they different.
Ans :  In our city men and women work to feed their family. They work in offices and other establishments. In a city like Mathura people worked to provide food items to the city folks because it was located at the intersection of two major trade and travel routes. Life of people of our cities and that of Mathura was in no way much different.

About the Author: Nisha Rathod